The HKMSS took up the March 2016 slot of the HKNS Monthly Neurological Clinical Meeting this year. Chaired by Dr. KL Shiu, three of our council members shared their experiences in CNS demyelinating diseases. Dr. Stephen Cheng focused on the radiological aspect; Dr. Richard Li elaborated on the evolution and latest updates in treatment; and Dr. KK Lau presented two cases of NMO before exploring how pregnancy affects MS and NMO patients.

Here are excerpts of each of their topics: 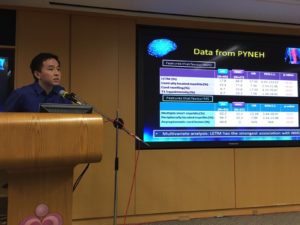 The 2015 revised Wingerchuk Criteria has better clarified the seronegative NMO spectrum diseases, and gave us supplementary clinical and MRI features to differentiate them from MS. The Magnetic Resonance Imaging in MS (MAGNIMS), which is a European network of academics specialized in MRI of MS, also published their latest guidelines in January 2016.

While the appearance of brain and cord lesions may help to differentiate between NMO and MS, differentials other than demyelination must be considered, such as spinal cord arterial infarct (ventrally located); syringomyelia (history of trauma) and genuine neoplasm (e.g astrocytoma).

Multiple sclerosis management from A to Z: Dr. Richard Li 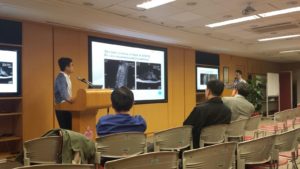 The treatment algorithm of MS has evolved rapidly, and a large number of therapies have been approved for use in the past few years. To diagnose MS, oligoclonal bands and serum anti-NMO IgG are helpful tools to differentiate it from NMO. In Hong Kong, patients with MS may receive interferon beta as first line therapy under the Hospital Authority guideline.

It is always important to monitor compliance in patients receiving IFN-B, and the Modified Rio Score may be helpful in assessing whether patients are interferon responders. For non-responders, current second line therapies in HA include Fingolimod and Natalizumab, either as self-financed-items or Samaritan Fund supported depending on patient’s financial eligibility. Other new and incoming therapies in Hong Kong include Teriflunomide, BG-12 and Alemtuzumab. Internationally, Ocrelizumab has also been recently announced as the first drug with positive results in PPMS in addition to RRMS.

Seropostive NMO is an inflammatory demyelinating disease of the CNS with antibodies directed to the aquaporin-4. Immunpathologic evidence has suggested AQP4-IgG to be pathogenetic, and the antibody is expressed in placental syncytiotrophblast, at levels that vary in different stages of pregnancy. Apart from Azathioprine and Mycophenolate Mofetil, Rituximab is another approved disease modifying agent of NMO, which decreases peripheral CD20+ B cells. However, it does not eliminate plasma cells in the marrow or pre-existing antibodies.

For NMO patients who become pregnant, there is a decrease in annual relapse rates during the 1st and 2nd trimesters, but increases during the 3rd trimester. Pregnancy also has a greater negative effect on disability for NMO patients compared with MS patients. Pregnancy after NMOSD onset is an independent risk factor for miscarriage and pregnancies    conceived at times of high disease activity may also be at increased risk of miscarriage. For NMO patient planning to conceive, it is recommended to stop MMF at least 6 weeks and rituximab at least 12 months prior to conception. They should be put on steroid and continued until delivery.